This week the guys muse about pugs before they dive into their full slate of movies. First Kris deals with TRANSFORMERS: THE LAST KNIGHT (3:20), a movie that feeds into Marky Mark’s savior complex with a story dating back to medieval times. Beaten, a little bruised, and exhausted by its stupidity, Kris passes the baton to Evan, who tackles the Netflix film WAR MACHINE (19:57), a glacially-paced bore with a strangely stacked cast led by Brad Pitt, and a narrator that doesn’t show up until halfway through the picture. Dave enters the fray next with THE JOURNEY (34:14), a decent Irish drama with light comedy and two leads using very different acting styles. Kris wraps everything up with THE BAD BATCH (46:00), a gritty post-apocalyptic Western with Jason Mamoa, Keanu Reeves, and Jim Carrey?! Before signing off, Evan gives a shout out to Max Covill and John Gilpatrick for having him on their show It’s the Pictures to talk about 80s films and his book. 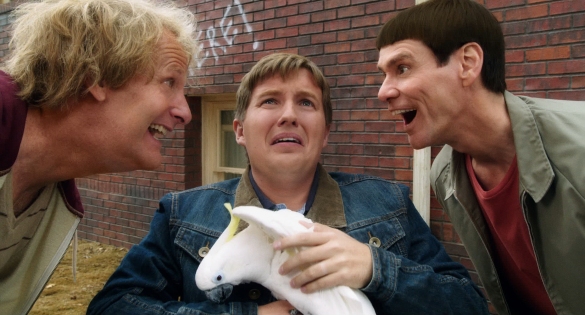 It’s a mix of the highbrow and lowbrow this week as we talk about the complexities of Iran in Jon Stewart’s ROSEWATER, and the comedic atrocities of DUMB AND DUMBER TO, a 20-years-later sequel that no one wanted. Or if they DID want it, they wanted it 15 years ago. Plus, how many viewers will get that the “to” is misspelled on purpose?