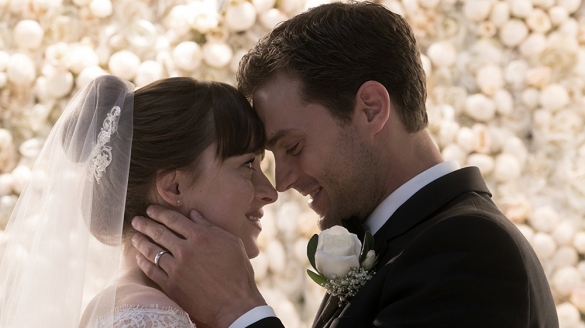 Marriage is the least insane thing to happen to Anastasia Steele and Christian Grey in FIFTY SHADES FREED.

This week starts with the guys yakking about the READY PLAYER ONE trailer, since Dave and Evan were forced to watch it twice in one sitting. The rest is about two new pictures coming to theaters. First, Kris reviews FIFTY SHADES FREED (3:41), the final chapter in the franchise, which he says redefines the term “captive audience.” Kris laughs at its batty kidnapping plot and explains how it connects to FIFTY SHADES DARKER, a movie that recently made him subscribe to HBO, just so he didn’t have to buy it on Amazon. Next, Evan and Dave take on Clint Eastwood’s THE 15:17 TO PARIS (29:22), a film so bad it actually makes Evan jealous of Kris. They rail against Eastwood’s decision to use real people instead of actors, its terrible dialogue, and its boring focus on minutiae.