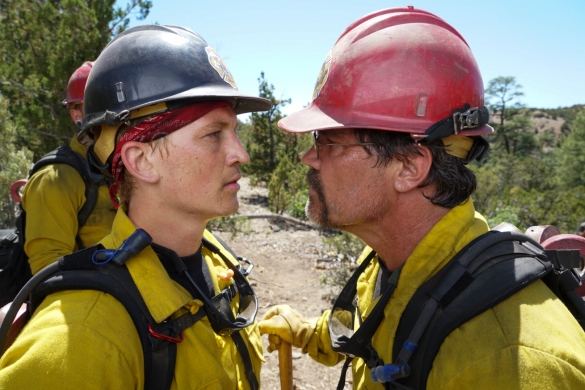 Josh Brolin berates a seemingly eyebrowless Miles Teller in ONLY THE BRAVE.

This episode begins with epic tales of Dave’s film school smoking habits, which were quite epic. Then it’s on to the main event, where Kris tells of his recent Netflix adventures with BIG MOUTH (5:45), the new animated show featuring Nick Kroll, John Mulaney, Jessi Klein, and a host of guest stars. It cuts deep with the preadolescent awkwardness, but it’s worth your time. Next up is THEY LOOK LIKE PEOPLE (11:35), an atmospheric, psychological horror film about two friends: one who is having a slow psychotic break where he can’t trust anything he sees or hears, and the other whose entire existence is a facade erected to protect is insecurity. It’s great, and Kris convinces Dave and Evan to see it right away. Last up is ONLY THE BRAVE (32:37) a true-ish story about the Granite Mountain Hotshots, whose heroism deserves a much more thoughtful, intelligent, and coherent movie than the one they got.