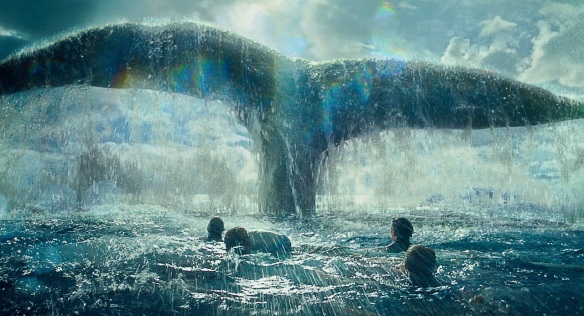 Very different opinions about the whale from IN THE HEART OF THE SEA. Kris was thrilled by it, but Evan, not so much

Dave is back from sick leave to share his unique take on a classic lullaby. Then Evan and Kris jump into reviewing Ron Howard’s IN THE HEART OF THE SEA, or IN THE FART OF THE SEA, as Dave calls it. The film stars the Greater Hemsworth (Chris) and Brendan Gleeson, but not Dave’s favorite actor Ray Winstone. It’s a movie about a sperm whale that kills seamen, and yes the guys milk that fact for all the laughs it’s worth. They also don’t shy away from making CABIN BOY references whenever possible. Probably the biggest surprise is how much Evan and Kris disagree about it. Their conversation veers into a tangent about Ron Howard films, before all three guys get into this year’s Boston Online Film Critics Association (BOFCA) awards. The three of them share their top 10 lists, and delve into some of the categories where they had completely different items in their ballots like Best Foreign Film and Best Documentary. Highlights include PEACE OFFICER, FINDERS KEEPERS, STRAY DOG, and JAFAR PANAHI’S TAXI. Before they sign off, the guys have a few words of appreciation for the marketers giving BOFCA’s awards some attention, and a few choice words for the organization’s critics.