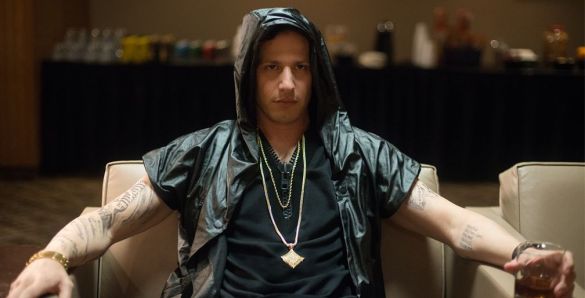 This week Kris reveals an ad campaign that makes him irrationally angry. Then it’s onward to four movies! Dave finally watched TENACIOUS D IN THE PICK OF DESTINY (at 4:11), so he’s nervous to talk about with two “D-heads” like Kris and Evan. He shares why it’s objectively not great, while also digging into the parts of it that are fuckin’ hilarious. Evan delivers on a promise as well, by reviewing NEW JACK CITY (at 23:24), which he LOVES for its energy and the way its action scenes are shot. He admits that it’s heavy handed with its messaging and inconsistent in tone, however he lauds it for its important social commentary on race and class. After that Kris jumps in to spoilerpiece THE LOBSTER (at 41:04), which he wasn’t expecting to take him for such a ride. It’s framed, paced, and costumed like an awkward Sundance comedy riffing on Wes Anderson, yet more brutal than unrelenting horror movies. Lastly, Evan concludes with POPSTAR: NEVER STOP NEVER STOPPING (at 52:25). This movie by The Lonely Island is mostly “eh” with a few jokes that hit and a lot of jokes that miss. Plus, in the realm of showbiz mockumentaries it doesn’t really have anything new to say.