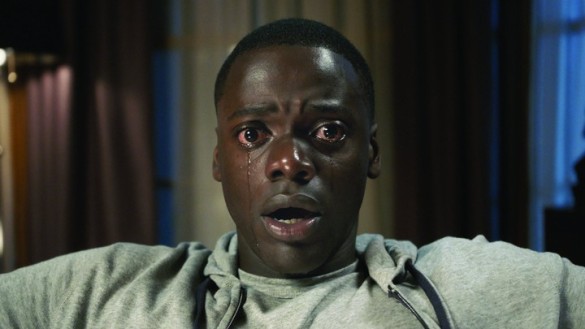 Daniel Kaluuya is hypnotized in Jordan Peele’s fantastic directorial debut GET OUT.

This week Evan learns the meaning of the term “hippie lettuce” and the results are mind blowing, well to him anyway. Kris opens with a segment of “Keepin’ up with the Jensons” (at 4:40) where he talks about how great the performances in FENCES are and why he didn’t mind the Google Earth portions in LION as much as other people. Next, Evan shares his psycho stalker weekend. No he didn’t stalk anyone. He just watched THE BOY NEXT DOOR, FATAL ATTRACTION, and SINGLE WHITE FEMALE within two days and dug them all for their unhinged villains and insane plot twists. Lastly, the guys review the horror film GET OUT (at 30:38), Jordan Peele’s tremendous directorial debut, which they all had the privilege of seeing. They have so much fun spoilerpiecing their screening’s engaged audience, the sense of terrifying dread that Peele creates, and all of the subtle foreshadowing Peele lays down for the frightening events that follow, that they end up running a little longer than usual.