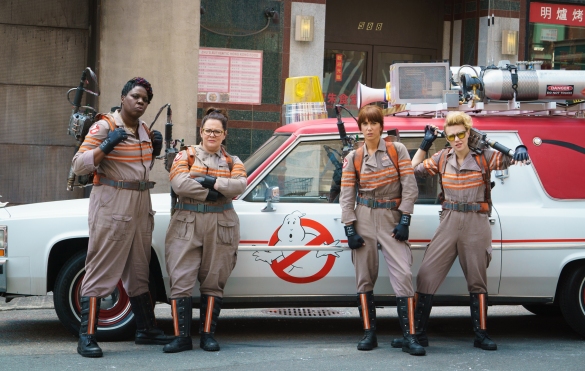 We talk about what works and what doesn’t in the new GHOSTBUSTERS.

This week Kris shares his revolutionary idea for a new mobile game before he and Evan jump right into the new GHOSTBUSTERS (at 3:24). Kris tends to be more negative about it, but Evan also reveals some aspects that don’t work for him. They try to take time to talk about the things in it they enjoy though, like the gadgets, the camaraderie between the characters and individually hilarious players like Kate McKinnon and Leslie Jones. After covering this film about women made by a man, Kris transitions into commentary on CHEVALIER (at 25:52), a Greek movie about men made by a woman. He describes why this “bone dry” comedy is a metaphorical dick joke and tells Evan and Dave why they absolutely need to see it. Next up is Dave to discuss TONY ROBBINS: I’M NOT YOUR GURU (at 35:00), a Netflix documentary directed by Joe Berlinger. Dave describes why it’s a concert movie, while sharing insights from his recent interview with Berlinger. Finally, Evan closes with THE INFILTRATOR (at 49:38), a tense undercover caper with Bryan Cranston. He catches Kris and Dave’s interest with his commentary on how the cops are always barely one step ahead of the criminals they’re chasing in the picture.

The sad tale of how Dave broke his middle finger inspires a bizarre horror movie premise on this week’s show. Then Evan’s passing joke about GHOSTBUSTERS leads to a discussion about James Rolfe’s boycott of the new version. Once the guys finish explaining why Rolfe (aka the Angry Video Game Nerd) is wrong, they dig into the political documentary WEINER (at 15:30). All three of them share why this film about Anthony Weiner’s failed run for Mayor of New York City captivated them with its tense interactions and impressed them with its inclusion of his wife Huma Abedin’s perspective. After all their Weiner jokes stop making sense, Evan moves on to cover the HBO movie CONFIRMATION (at 39:34), which chronicles the sexual harassment allegations made against Judge Clarence Thomas during his nomination for the U.S. Supreme Court. Although it feels like too much of a made-for-TV movie, Evan argues that it’s an important story that needs to be told (and seen) since it shares Anita Hill’s perspective and exposes the shady Washington backdoor dealing that actively worked to discredit her. Plus, both Kerry Washington and Wendell Pierce are fantastic in it as Hill and Thomas.

This week on the podcast we have fun tearing the Pierce Brosnan crapfest THE NOVEMBER MAN to pieces. Then we get into our delight at the re-release of GHOSTBUSTERS. Plus, we break off into lots of tangents about movie villains and all kinds of other stuff. And it’s true: This man has no dick.