Even a dual-wielding Denzel isn’t enough to make THE EQUALIZER 2 as good as its predecessor.

Just how old was the PEZ that Evan ate recently? Find out on this week’s episode! After the guys chomp through the answer, Evan and Kris share their most triumphant experience watching the Slaughterhouse Movie Club’s burlesque show and presentation of BILL & TED’S EXCELLENT ADVENTURE (5:15) on the big screen. Next Dave fills them in on his not-so-hazy adventure tracing the evolution pot films (8:37), where he saw cannabis classics like REEFER MADNESS, MARIHUANA, SHE SHOULD HAVE SAID NO, EASY RIDER, and 9 TO 5. Once the smoke clears, Evan digs into MAKTUB (20:46), the adorable Israeli film about two mobsters who attempt reform by granting people’s wishes…in their own way. Unfortunately following his glowing review, Dave must reveal why UNFRIENDED: THE DARK WEB (31:00), a movie Evan and Kris hoped to see, is a terrible sequel to its smart predecessor. Finally, Kris and Dave wrap things up with THE EQUALIZER 2, another sequel that doesn’t measure up, mainly because, as they point out, it doesn’t feel nearly as dangerous, and lacks cohesiveness with its pacing and plot. 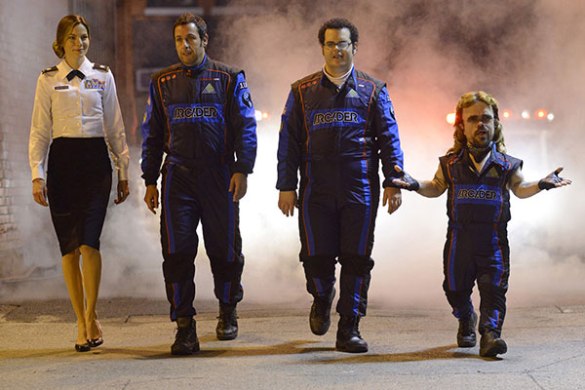 How the fuck did Josh Gad and Peter Dinklage end up in PIXELS?

This week Dave tells everyone more about why he loves HIDING OUT with John Cryer and poses an interesting theory about Jim Carrey before Kris shares that he was wearing flannel before it was cool. Evan kept his promise to see THE TRIBE so he can’t wait to share his thoughts about how fucked up its graphic scenes of violence and sex are. Then he tries to summarize the plot for PIXELS, while explaining how terrible it is to Dave and Kris. Thankfully Kris shifts momentum to discuss SOUTHPAW, which is about a boxer who isn’t a southpaw, but he does have his own entourage. Dave wraps up the episode by reviewing INFINITELY POLAR BEAR, a film he enjoyed where Mark Ruffalo plays the kind of bipolar father who tells rivers to go fuck themselves.

Hey, peeps! It’s Friday and time to spoil the snot out of new releases! This week it’s Terry Gilliam’s regrettable THE ZERO THEOREM and the Dave-and-Kris-loved-it Denzel Washington kill-fest THE EQUALIZER. Plus, on this episode: TANGENTS. But it wouldn’t be Spoilerpiece without tangents, right?