We have two movies to discuss this week! First, we cover Bretten Hannam’s Two-Spirit Indigenous drama WILDHOOD (2:39), a road trip film coming to Hulu about two brothers, one of whom is searching for his long-lost birth mother. Along the way, he finds himself by connecting with his heritage and comes out through a relationship with someone he meets along the way. Next is Phil Tippett’s MAD GOD (22:52), an unsettling stop-motion-animated horror film on Shudder that’s 30 years in the making. It’s easy to describe visually, but hard to describe narratively. And in this week’s Patreon exclusive audio, we talk about the winner of our Pride Month poll, Robin Campillo’s drama 120 BPM, which chronicles the work ACT UP Paris did in the early 90s to fight the AIDS epidemic.

Pepperidge Farm cookies are the latest topic of food debate this week. Dave leads off the movies with the Borat sequel, BORAT SUBSEQUENT MOVIEFILM (2:32), by covering how it stacks up to the original. Then everyone talks about Aaron Sorkin’s timely Netflix courtroom drama THE TRIAL OF THE CHICAGO 7 (8:35). After that it’s onward to the drug-fueled sci-fi drama SYNCHRONIC (29:10), starring Anthony Mackie. And things heat up while discussing Justin Simien’s Hulu horror comedy BAD HAIR (40:04). In this week’s Patreon bonus audio, we review a Patron’s selection, the 1996 cult classic THE CRAFT. 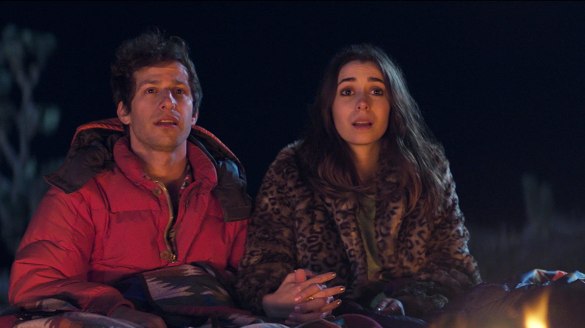 Happy 6th Birthday Spoilerpiece! We celebrate by discussing sexy Abraham Lincoln before the movies this week. First, Megan and Evan reveal why neither could finish the twisted, brutal film THE PAINTED BIRD (3:39). Next, they dissect Shudder’s Norwegian horror flick LAKE OF DEATH (9:16). Then they share their differing opinions about the queer Netflix action movie (based on the comics) about immortals, starring Charlize Theron and KiKi Layne, THE OLD GUARD (19:00). Finally, everyone reviews the Andy Samberg / Cristin Milioti rom-com PALM SPRINGS (42:07), which they all very much enjoyed. Also, in this week’s exclusive Patreon audio we review a Selectpiece patron’s pick: THE ADVENTURES OF BUCKAROO BANZAI ACROSS THE 8TH DIMENSION.

This week it’s a Bohemian Rootbeersity before the movies. To continue amplifying Black voices in film, we start by discussing PREMATURE (3:01), a compelling Harlem-set coming-of-age picture. Then we talk about THE SURROGATE (24:45), a challenging movie about a surrogate for her gay best friends who faces some thorny decisions. Lastly, we review THE KING OF STATEN ISLAND (49:30), Judd Apatow’s latest comedy, starring Pete Davidson in a very autobiographical story. On our Patreon bonus episode, we discuss Horace Jenkins’ classic Black film (that was lost until a few years ago), CANE RIVER.

This week’s episode starts with Evan recapping ALL THAT WE DESTROY (3:48), the latest entry in Bumhouse’s INTO THE DARK anthology series. There have been some highs and lows in the series, but this one is unfortunately one of the lowest. Then it’s Dave with ECHO IN THE CANYON (13:41), a fun and informative look at the origins of the Laurel Canyon music scene of the 1960s with interviews conducted by Jakob Dylan. Then it’s Kris with his experience marathoning WAR AND PEACE (19:54) at the Brattle where he says “big” and “massive” a lot. The episode wraps up with TOY STORY 4 (37:30), which is way more fun, tearjerking, and overall effective than anyone might have expected.

Kris has a nasty case of the Super Plague so guest Kristen Halbert joins Evan and Dave in hating on kale before the movies this week. First Dave describes why watching the Aretha Franklin documentary AMAZING GRACE (3:51) is a spiritual experience. Then Kristen and Evan talk about why LITTLE (11:37) is absolutely hilarious and genuine despite the fact that it borrows from several films about adults turning into the child versions of themselves. Lastly, all three of them join forces for I’M JUST FUCKING WITH YOU (27:45), the latest in Hulu’s INTO THE DARK series, which has them looking for excuses to talk about literally anything else. Tangents ahoy! Also don’t forget to sign up for our Patreon, where you can hear exclusive audio, like this week’s clip of Evan and Dave discussing ALL THE PRESIDENT’S MEN.

This week, Dave recaps POLAR (2:52), clarifying last week’s confusion over ARCTIC. Very different films! Next, Evan and Dave recommend DOWN (17:15), an entry in Blumhouse’s INTO THE DARK series on Hulu, full of lean, holiday-themed horror flicks. This one is a Valentine’s Day creepfest that is well worth your time. Then, Evan and Kris talk HOW TO TRAIN YOUR DRAGON: THE HIDDEN WORLD (23:28), a fine conclusion to a great family-friendly series.

Because everyone is talking about the Fyre Festival documentaries on Netflix (FYRE) and Hulu (FYRE FRAUD), Kris, Dave, and Evan dive headlong into the two competing flicks (5:14). Think there isn’t enough Fyre disaster to support two documentaries? Think again! Then it’s onto Adam McKay’s VICE starring Christian Bale as Dick Cheney. Why is it Kris’ nomination as the worst movie to ever receive a Best Picture Oscar nomination? Explanations begin at 26:11. On our exclusive Patreon audio segment this week, we have a chat about how much we love the late Bill Paxton, and whether it’s possible to get the clap in space.

Julianne Moore and Matt Damon in SUBURBICON, a movie that would have been better if the Coen Brothers made it in the 80s.

This week the guys reminisce about long-gone insults of yesteryear before Kris offers a unique barb of his own design. For the movies, Evan delivers a “Crewind” of G.I. JANE (5:00), the Ridley Scott picture where Demi Moore is a badass Navy SEAL in training trapped in a story that gets a little muddled with conspiracy plots. Next Dave covers TOO FUNNY TO FAIL (17:17), a rollicking documentary on Hulu about the short-lived DANA CARVEY SHOW that explains that the inspiration for some of the show’s best sketches while reflecting on its failure. Then the guys take on SUBURBICON (28:35), a George Clooney film that borrows an old Coen Brothers script, but fails to imitate them effectively. While they chide it for being too heavy-handed and trying to cover too much narrative ground, they can all agree that Oscar Isaac injects much-needed vitality into his brief scenes.