This week just in time for the holiday, we kick off our show with Stephen Karam’s Thanksgiving family drama THE HUMANS (1:41), which underwhelms despite its stacked cast. Next we discuss Halle Berry’s directorial debut BRUISED (16:32) a formulaic sports film about a down on her luck queer MMA fighter trying to find redemption. Then we review KING RICHARD (34:45), Reinaldo Marcus Green’s engaging sports biopic, which looks at how Venus and Serena Williams’ father Richard (Will Smith) propelled them into tennis superstardom from birth. And in this week’s Patreon exclusive audio, we talk about the winner of our November film noir poll, Robert Altman’s 1973 film THE LONG GOODBYE, starring Elliott Gould!

Check out this week’s episode of Spoilerpiece Theatre!

(NOTE: This show opens with the music, so be warned that it’s a little louder than usual.) Welcome to a diverse week of movies on Spoilerpiece! As Kris notes, there couldn’t be four more different flicks featured on the show. First, Kris talks a little about WHITE CROW (2:20), which Dave recently saw (and wanted to hear Kris’ opinion), then Dave dives into Olivia Wilde’s feature-directing debut BOOKSMART (7:16) and his interview with Wilde. Then Evan covers EXTREMELY WICKED, SHOCKINGLY EVIL, AND VILE (18:16), the Ted Bundy movie starring Zac Efron and directed by Joe Berlinger (and it features some serious stunt casting). Finally, Kris talks the Disney live-action remake of ALADDIN (32:30) and blue Will Smith. Why is 38 minutes longer than the animated version? Kris tells you why!

Pee talk takes an unexpected, yet movie-related turn at the start of this week’s episode. Once the guys dispense with their bathroom discussion, they move on to the Boston Online Film Critics Association’s yearly awards, which were recently announced to the public. The guys quickly walk through their ballots (at 4:37), mentioning their favorite films that didn’t win, exploring the nuances of their votes, and teasing movies like FENCES that they look forward to discussing in future episodes. After the awards excitement, Kris reviews COLLATERAL BEAUTY (at 28:00), a picture that sounds like an emo side project, where the filmmakers couldn’t decide between making an awards movie or a Christmas movie, so they made both and got something awful. With that out of the way, Dave and Evan take on this week’s big release, ROGUE ONE: A STAR WARS STORY (at 44:00), a prequel that doesn’t have much in common with other entries in the STAR WARS franchise. It has a diverse cast of skilled actors, deaths with weight, and a director that cares about framing shots, however Dave and Evan don’t think it deserves the hype from critics.

Unfortunately Dave needs to leave mid-episode this week due to a minor emergency, but don’t worry, he’ll be back next time! Before he takes off though, he gets to hear Evan talk about BAD MOMS (at 3:46). Evan describes why this unfunny comedy has a noble message that it stupidly undermines the entire time. He also describes why it can’t seem figure out how far to go with its jokes. Following that, Kris reviews the much-anticipated SUICIDE SQUAD (at 22:14). Sadly, he has more good things to say about the burger he ate after the movie than the movie itself. Over the course of his talk, he reveals why he upgraded his review from, “It’s stupid, don’t see it,” to “It’s toxic, shun it.” Finally Evan and Kris conclude with STRANGER THINGS (at 42:28), the Netflix series that everyone has been talking about. They delve into the show’s layered plot, sharing exactly why it resonated with them. And of course, because this is Spoilerpiece Theatre, they dig into some plot holes that got on their nerves in an otherwise tremendous series. 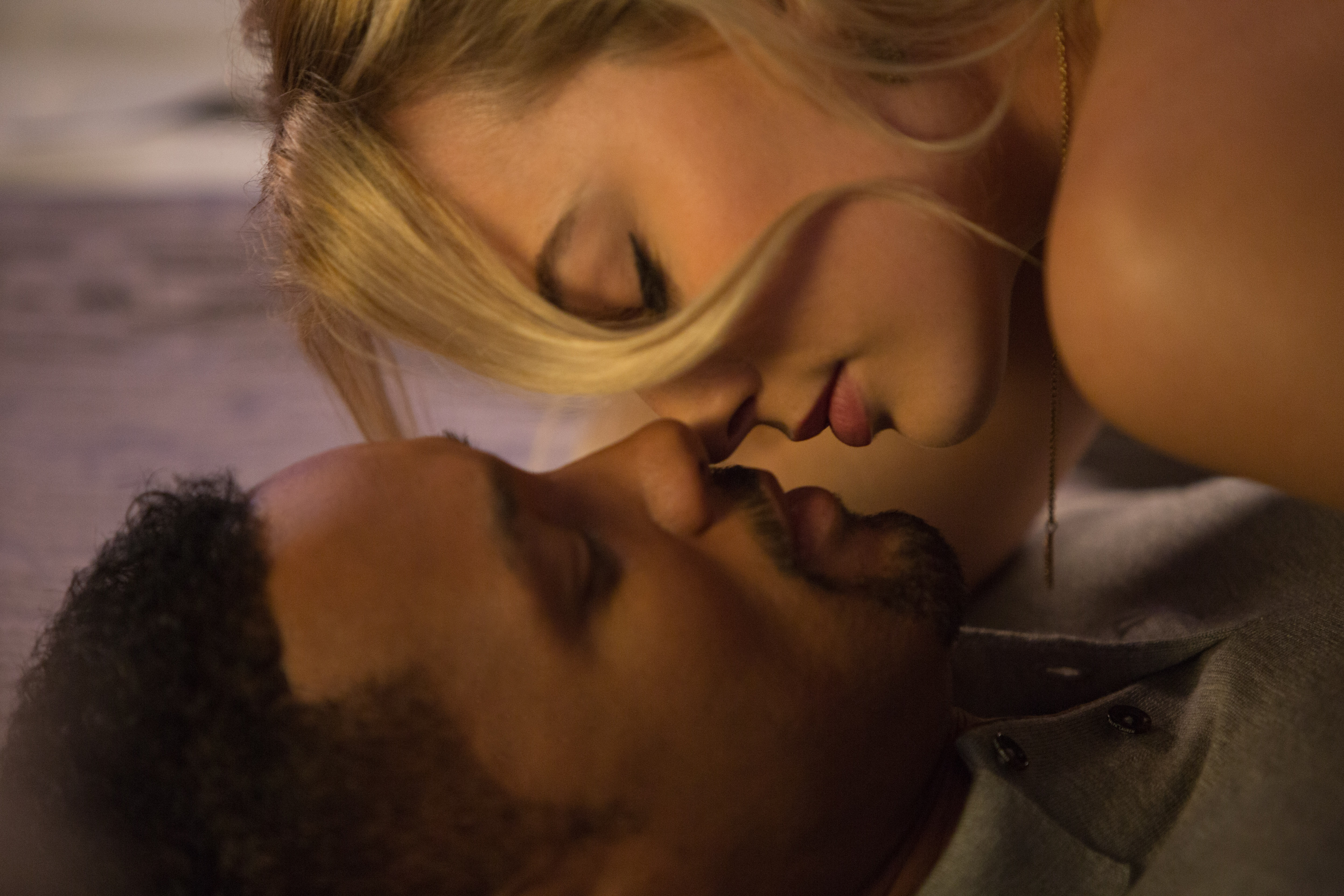 Will Smith and Margot Robbie do a lotta bonin’ in “Focus.”

You know it’s a good night at SPOILERPIECE when we break into a lengthy tangent about Journey, Steve Perry, and the video for “Oh Sherrie,” which Kris dubs “fuckin’ weird.” When we’re not talking about eighties pop-rock icons, we’re talking about aughts icons Tenacious D, and the movies FOCUS (which has a great performance by the underappreciated B.D. Wong), and THE LAZARUS EFFECT. One is worth seeing; one isn’t. In other news, Kris fills us in on his ongoing attempts to cook; Evan does more singing than he usually does; and Dave has a question about the Lego Oscar. Oh, what a night!